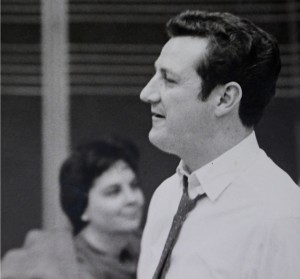 John H. Pearce grew up in Terre Haute, IN where he attended Indiana State University, earning a BS degree with a major in music. Following graduation, he served in the U.S. Army as a Chaplain’s Assistant in occupied Germany. After his tour of duty, he moved to Chicago to complete his education at the American Conservatory, earning both a Bachelor of Music Education and a Master of Music degree. During the five years he resided in Chicago, he sang tenor as a performing member of the Lyric Opera Company.

John (JP) and his wife, Elvina, moved to Naperville in the fall of 1965 where he became the choral instructor and Chairman of the Music Department at Naperville Central High School, a position he held until his retirement in 1985. During the several years before North High School became a four-year school, he traveled between the two buildings, directing choruses during each period of the school day. When he joined the NCHS staff in 1965, the choral department consisted of two mixed choruses. By the time he retired in 1985, it had expanded to include seven choruses with a total membership of nearly 500 students.

During his tenure at NCHS, JP brought a series of musical “firsts” to Naperville which included a 1967 production of Where’s Charley?, the first local high school production of a complete Broadway musical. This began a tradition for Pearce and his students of striving each year to give a near-professional quality to their productions of most of the major Broadway musicals including Kismet, L’il Abner, Kiss Me Kate, Hello Dolly!, The King and I, Man of La Mancha, South Pacific, The Music Man, Camelot, Oklahoma, Annie Get Your Gun, and My Fair Lady, to name just a few.

JP also instigated the tradition of an annual fall musical revue that featured not only students but a parents’ chorus as well. In 1967, he brought Naperville its first summer music-theater workshop which culminated in a production of the off-Broadway musical, Riverwind. In 1969, he urged orchestra and band students to join the choral students participating in the Illinois High School Association (IHSA) and the Illinois Music Educators Association (IMEA) music festivals and contests, and that same year, NCHS received the coveted IHSA Sweepstakes Trophy for an accumulation of the highest ratings by soloists and ensembles in the state contests. In 1978, Pearce formed the school district’s first swing choir called The Centralights which also received Superior ratings for their performances at numerous IMEA contest events.

JP’s creation of the Double Madrigal Chorale gave distinction to the NCHS Department of Music. These young musical ambassadors were awarded the opportunity to demonstrate their rehearsal procedures before a national convention of music educators in Cincinnati. This demonstration was followed by a half-hour concert for which the group received a standing ovation.

A myriad of invitations and performances were to follow. In 1972, the group was invited to perform at another regional conference in Indianapolis, along with back to back performances at national conventions in Kansas City and Anaheim, CA in 1973 and 1974. They also performed on the Chicago Public Library’s Noon-Hour Concert Series, and twice appeared on the Chicago Sunday Evening Club on Channel 11. The Double Madrigal Chorale was joined by the Concert Choir in six memorable performances with the Du Page Symphony.

Between 1977 and 1980, a unique holiday experience was created and established by JP and the Double Madrigal Chorale. This event involved the presentation of countless performances of Olde English Madrigal Feasts done in the style of an Elizabethan Christmas tradition – a “must see” for Naperville and surrounding communities, and always a “sell out!”

John Pearce will be remembered by many for his love of music and young people. His maintenance of the highest standards in music education, along with his boundless energy, enthusiasm, and dedication to achieving excellence in the performing arts was unmatchable. Above all, he believed in the potential of the young people with whom he worked, always encouraging them to not just “dream the impossible dream” but to strive to make it a reality!