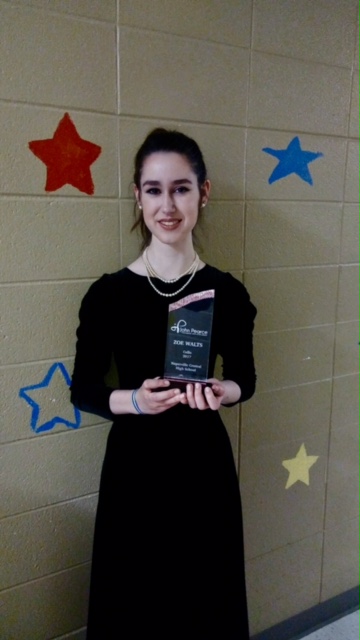 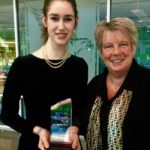 The third annual recipient of Naperville Central High School’s John Pearce Performing Arts Scholarship is cellist, Zoe Walts. The $1,000 award has been created as part of the Naperville Education Foundation (NEF) – www.nef203.org. The scholarship, established by alumni of Naperville Central High School’s music program, honors the 20 years (1965-1985) that John Pearce served as choral instructor, musical director and Music Department Chair. Former students benefitted greatly from Mr. Pearce’s musical gifts, direction and discipline in the arts and have created this scholarship in his memory. The scholarship is awarded annually to an outstanding graduating senior from either the NCHS band, choir or orchestra. Walts completed an extensive application process that included information about herself, a 500 word essay along with two letters of recommendation from individuals familiar with her work. Zoe’s quality application determined her as one of 11 finalists, who presented live auditions for the committee. In addition, percussionist Raelyn Erwin, has received an honorable mention and will be awarded $300.

Zoe Walts has been studying cello for eight years. She is a member of the NCHS orchestra, the Chorelles female choral A cappella group and plays bass pan in the District 203 Steel Pan Ensemble. She is also part of student government, theater, theater technology and is a member of the National Honor Society. Zoe will major in Neuroscience with a minor in French Language. Music will continue to be a big part of her life, as she will perform in university orchestras, chamber groups and will take private lessons. She sincerely thanks the John Pearce Scholarship for it’s generous contribution to support her pursuit of music in college. Zoe will perform her solo cello audition piece as part of the Naperville Central High School Spring Orchestra Concert on May 11 at 7:00 p.m. where she will be acknowledged and presented with the NCHS John Pearce Performing Arts Scholarship award by Raeleen Horn – Class of 1976 and JPPAS Steering Committee Chair. Horn adds, “This is a wonderful way to honor a great teacher by supporting our youth who plan to continue their musical experiences at the college level and beyond.”