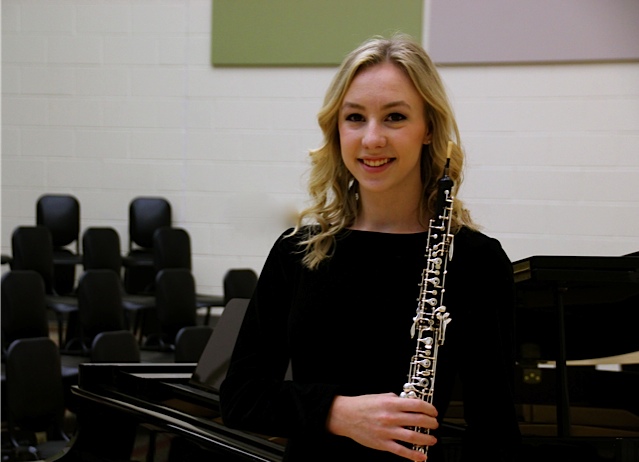 A three year principal oboe of the NCHS Wind Ensemble, Kayla, has also played oboe and English horn as a member of the Chicago Youth Symphony Orchestras for the past four years and currently is principal oboe in both of their top two ensembles. As a member of the chamber group Millennium Winds she can be heard later this summer on the radio show Introductions on WFMT which show cases top pre-college musicians in the Chicago area. She considers herself extremely fortunate to have had opportunities to perform with major artists such as Blue Man Group, Ben Folds, and Active Child, and after a successful audition for the Chicago Youth in Music Festival Orchestra this past winter she had the honor to perform under the baton of noted Russian conductor Gennady Rozhdestvensky. Kayla has studied oboe for nine years, the last seven under the instruction of Dr. Alicia Cordoba Tait. Her additional studies include the Interlochen Advanced Oboe Institute and the Northwestern University Oboe Workshop. This fall she will begin pursuing a degree in oboe performance. Kayla finds particular joy in the time she spends teaching young middle school oboists from her home studio. Kayla is honored to receive the 2016 JPPAS award in memory of a very special former music teacher of NCHS. Kayla is thankful to the audition committee and everyone involved who made this opportunity possible.